Protecting charity shop workers – and volunteers – is an issue of great importance to the Charity Retail Association.  Earlier this year, my team conducted our new research on the prevalence of a variety of types of crime in the charity retail sector.

In addition to findings about shop-lifting, burglary and fly tipping in charity shops, we were alarmed to discover that:

Therefore, we have been following with interest, the attempts of one MP to change law to give greater protections to shop workers.  Alex Norris MP (Lab/Co-op, Nottingham North) has proposed an Assaults on Retail Workers (Offences) Bill in Parliament.  This would make certain offences aggravated – allowing for longer sentences – when carried out against shop workers.

He has said: “My reason for wanting to bring about this Bill is simple, to protect shop workers in the course of their jobs, recognising that they are working in the public interest.”

We have also been working on this issue for some time.  For example, I recently attended the meeting of the Welsh Cross Party Group on Small Shop when this hosted a meeting in the Welsh Assembly on retail crime, and reported back to our members in this blog. 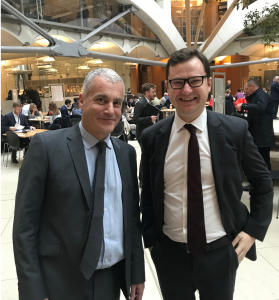 Nobody who works or volunteers in a charity shop should have to suffer intimidation, abuse or even violence, when giving their time to support a charitable cause.  We therefore strongly support efforts to change the law to deliver greater protections for these people, with whom our sector could not contribute £278m to charitable causes every year.

With this in mind, Robin Osterley the CRA Chief Executive, and I met with Mr Norris in Portcullis House, Westminster last week. (pictured right)

We discussed how the bill’s passage has stalled in Westminster’s arcane Private Members Bills procedure, and how the CRA would proactively support any initiative to revive it.  We also agreed that the bill should be written so that charity shop volunteers, as well as paid retail workers, are covered by additional protections.

This is something we will continue to campaign on because the people who volunteer and work in our members’ shops deserve nothing less.

Are you ready for the new £20?
16/01/2020
Next month, the new polymer £20 note will begin to appear in ATMs and tills across the UK. It is printed on polymer, features the artist JMW Turner on the reverse but retains the distinctive £20 purple colour. ...

National Living Wage and National Minimum Wage Increases
06/01/2020
The Government has announced increases to minimum pay levels. These increases will come into effect on 1 April 2020 and will be mandatory from that date....

Product Recall: Whirlpool Washing Machines
23/12/2019
We would like to notify our members of the recall being instigated by the Whirlpool Corporation in relation to certain models of Hotpoint and Indesit washing machines. ...

E-commerce Day 3 March 2020
02/01/2020
We are delighted to announce that we will be hosting our first e-commerce day on Tuesday 3 March 2020 in Birmingham. The day will bring together success stories from the charity retail sector in e-commerce, as well as some e-commerce suppliers. ...

Be a “Good Cause Santa Claus” this Christmas
28/11/2019
Our Christmas campaign is back with a bang! Instead of picking the usual bottle of plonk, or boring box of chocolates, why not add a little Christmas sparkle to your Secret Santa this year and help good causes, by buying your gifts only from charity shops?...

Nisyst and CRA training partnership for 2020
11/11/2019
After retendering for the delivery of our Retail Gift Aid training courses, we are pleased to announce that corporate member Nisyst will be running these in 2020....
JOBS IN CHARITY RETAIL