Thirteen charities warned today that a hike in charity shop rates in Northern Ireland could mean they would have £5.5m less to spend on the most vulnerable.

Charity shops are currently entitled to 100% relief on their business rates, but this being reviewed by the Department of Finance and Personnel at Stormont with the possibility that the relief could be reduced or eliminated.

They insist that their shops boost local business, provide jobs and help tackle social isolation as well as helping people in need.

One charity estimated that even a 20% rise in its rates would mean they may have to axe potentially life-saving health checks for 1,142 local people.

The #MoreThanAShop campaign is asking the public to show their support by dropping into their nearest charity shop and signing a petition, which will be presented at Stormont in mid-March.

“If our charity shops had to pay full rates, this could mean up to £5.5m would no longer be available to charities to fund their vital life-saving and life-changing work.” 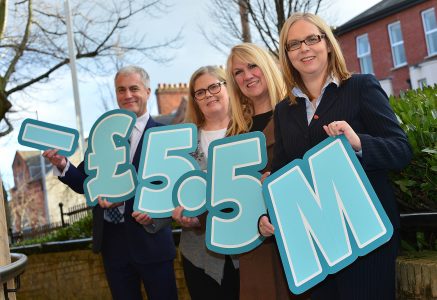 “They also help attract visitors to the high street even during economic downturns, provide good quality products for local people on a budget, and divert over 21,000 tonnes of textile from landfill, saving local authorities very significant sums in landfill tax.

She added that while no specific changes to the rates system had yet been announced, research from the Charity Retail Association indicated that even small amendments to the current system would have a huge impact on the wider work of the sector.

Head of Communications and Marketing

The Charity Retail Association (CRA) is the only body in the UK which represents the interests of charity retailers. CRA has nearly 400 members representing around 80% of all charity stores in the UK and including 14 chains in Northern Ireland.

Non-essential shops in England to reopen from 15th June
26/05/2020
The Prime Minister has confirmed that in England, non-essential retail stores, including Charity shops, will be expected to be able to reopen from 15th June if the Government’s five tests are met and shops follow the COVID-19 secure guidelines, giving them three weeks to prepare....

Call for further support with commercial rents
17/04/2020
We have written to the Secretary of State at the Department for Business, Energy & Industrial Strategy....

Virtual Reopening Meetings - Book now!
20/05/2020
We will be running a series of reopening meetings for members in the coming weeks which charity members are invited to attend. These will be on a much smaller scale than our previous two and are designed to facilitate member to member discussion and networking....

We have published our Reopening Pack!
05/05/2020
The pack consists of helpful guidance for when we are given the green light to open up shops, and provides some suggestions of things to think about in the meantime. ...

Support from Corporate Members
26/03/2020
Our Corporate Members have been busy coming up with innovative ways of helping others during this trying time. Check out our Directory of 'who's doing what' and see if there's anything that could help you....

The Charity Retail Association Calls Upon the Chancellor to Provide Vital Assistance to Charity Retailers
17/03/2020
We have written to the chancellor to ask for support as charity shops find themselves in an unprecedentedly precarious position due to the outbreak of COVID-19....
JOBS IN CHARITY RETAIL