The Charity Retail Association, formerly known as the Association of Charity Shops, has its origins in the Charities Advisory Trust (CAT) in the early 1990s. The CAT was, and still is, a group dedicated to improving the effectiveness of charities, especially in their trading and income generation dimensions, and was started in 1979 by Dame Hilary Blume. Dame Hilary responded to the large increase of charity shops in the 1980s and early 1990s by offering training sessions and advice, and it soon became clear that there was an appetite for a forum dedicated to discussing the issue of retail in the charitable environment.

Charity Shops Group
Thus was born the Charity Shops Group, formed at an inaugural meeting at the National Council for Voluntary Organisations in 1992. CAT acted as the secretariat for the Group, which offered networking, lectures and seminars, working lunches and other ways of exchanging information. This proved so successful that it was decided to formalise the Group with a steering committee, whose first chair was Colin Sandford of the British Heart Foundation (BHF). At this point the Group was also starting to attract smaller charities as well as the established large retail chains such as Marie Curie, Shelter, Oxfam, British Red Cross, Help the Aged, BHF and others.

Association of Charity Shops
In the later 1990s, especially after the 1997 General Election, a national voice for the sector became increasingly sought after, especially to deal with issues such as business rates relief and VAT. It was felt by the steering group that a more formal approach was now needed, and the members of the group co-funded a consultancy project, led by Robert Silbermann, whose conclusion was that, given the right business model, a formal association was sustainable and desirable and that there was considerable support within the sector to fund such an organisation. This led, in 1999, to a separation from CAT, and Lekha Klouda, who had been running the group for CAT, moved to become the first director of the new Association – the Association of Charity Shops (ACS).

The ACS first offices were donated by the late Nicholas Walter of the Rationalist Press Association and consisted of a couple of rather dingy rooms off Upper Street in London’s Islington, and after a few licks of paint and purchases of second hand furniture, ACS was open for business, swiftly moving to new offices in Shoreditch High Street in London. The first memorandum and articles of association, based on the original business model created by John Tough, were drawn up pro bono by Oxfam’s legal advisor Joss Saunders, and at the first formal AGM Colin Sandford was elected founding chair. One of the first services delivered to members was the quarterly market analysis of sector performance (which continues today in an almost unchanged format).

The organisation very quickly became established as the leading voice of the sector. The first conference, held in 2000 at Church House in Westminster, attracted around 200 delegates, and rapidly became a highly successful annual affair with a very successful trade exhibition attached. In the same year were launched the first website and the first special interest group, and the first corporate members joined. Subsequent years saw the introduction of a number of additional member services including a legal advice line, the members’ area of the website, further special interest groups, and more emphasis on lobbying and advocacy work. The prestigious Charity Retail Awards were started in 2002 at Conference, and the first Business Development Manager was appointed in the same year.

In 2004 ACS, by then being an organisation with five staff and a much bigger membership, moved to share premises with the Association of Charitable Foundations in Bloomsbury in central London. The following years saw a gradual increase in the profile of ACS within government and the appointment of the first Head of Policy in 2007, against a background of considerable growth within the association’s membership, both charitable and corporate.

Charity Retail Association
After more than ten years with the organisation, having built it up to a position of considerable strength, stability and influence, Lekha Klouda retired, and Warren Alexander took over as Chief Executive. Under his tenure a number of significant activities took place, including:

All of which have brought the Charity Retail Association to its current position as leader of the charity retail sector in the UK, with over 75 per cent of the shops in the UK under its umbrella. Warren retired as Chief Executive at the beginning of 2015, to be followed by Martin Blackwell, Steve Biddle (interim) and now Robin Osterley. 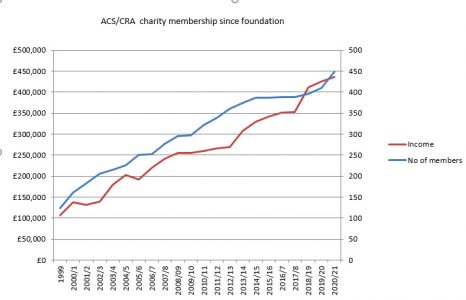